110 Gk Question and Answer Of Cricket 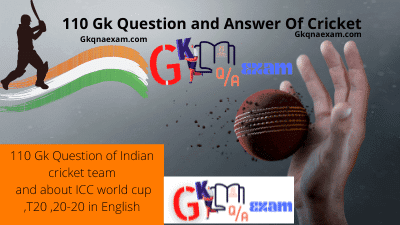 1. When did India play its First Test Match?

2. Who was the First Batsman ever to score a century for India in Test Cricket?

3. How many times did India win the Cricket World Cup?

6. How many times did India go up to the Semi Final of ICC World Cup?

7. How many teams participated in the ICC World Cup 2019?

10. Which Cricket Team has won the most ICC Cricket World Cup?

12) When was overarm bowling accepted as legal?

16) When was the Durham County Cricket Club founded?

17) What was the margin of West Indies victory over Australia in the first (1975) World Cup final?

19) Which cricketing law classifies throwing to be illegal?

21. Who was the Indian Captain when India won the Cricket World Cup in 2011?

22. Which Cricketer got India’s Highest Civilian Award The Bharat Ratna?

23. Who was the Player of the Tournament when India won the World Cup in 2011?

24. First Indian player to get the Title “Man of the Tournament” in the ICC World Cup?

25. What is the name of the Award for Top Wicket Take in the ICC World Cup?

26. What is the name of the Award for Top Run Scorer in the ICC World Cup?

27. When did the First ICC World Cup take place?

28. After how many years does the ICC World Cup take place?

29. When was Anil Kumble awarded as the Top wicket-Taker in ICC World Cup?

31. How many times did India host ICC World Cup Tournament?

32. Which Country hosted the most ICC World Cup Tournaments?

35. Who is the present Captain of the Indian Cricket Team?

36. Who is the present Coach of the Indian Cricket Team?

37. With which Country did India play its First Test Match?

38. Which country Played with India in their First ODI?

39. When did India Appear First in the World Cup?

41. Name of the First Indian Cricket Club Established by Indians?

45. When did the First IPL take place?

46. How many Teams played in the First IPL?

48. How many Overs are played in IPL?

50. How many Overs are played in ICC World Cup?

51) Which country has played the maximum number of one day matches?

52) What Indian cricketer is called “Zak” or “Zippy Zakky”?

53) Name the cities in India where Test cricket has been played on more than one ground:

54) On which ground did Jim Laker take 19 wickets in a Test?

55) Name the first captain of the West Indies team:

58) What town are the Surrey County Cricket Club based in?

59) The name of the Triangular Tournament played in Australia every year is the:

62) When was the Mumbai Indians club founded?

63) Who has the credit of captaining India to her first overseas victory?

65) What is the distance of the inner circle for the purposes of field restrictions in One Day Limited overs matches?

66) Name the Australian batsman whose great-grandfather also represented his country.

Answer: A ball moving two feet wide either side of the wicket is adjusted a “Wide Bail”.

69) What was the score of Gary Sobers in his only One Day International?

70) India first played against the West Indies in a One Day International at:

71) Name the oldest player in One Day Internationals:

72) Name the only Indian player to have won a ‘Man of the Match’ award in three consecutive matches against ngland, West Indies and Pakistan:

73) What was the unique thing about India’s victory at Old Trafford, Manchester (1983)?

Answer: It was West Indies’ first ever defeat in World Cup matches.

75) Name the father and son duo who have captained India in Tests:

76) When were Test Matches first televised?

77) Who is the heaviest cricketer of all times?

78) Who was the first bowler to create a hat-trick at Lord’s?

79) Who does the best batting average in a test career belong?

80) Who is the first captain to win the toss on all five tests?

81) Name the only cricketer to score five centuries in five successive innings:

82) Who is the only batsman to have hit a century in each innings of a Test thrice?

83) Which trophy is awarded to the winner of the West Indies Vs Australia Test Series?

84) Which trophy is awarded to the winner of the West Indies Vs England Test Series?

85) Who has been the first hat-trick recorded in Test?

86) The ‘Guinness Book of Records’ gave a memorable nickname to Kapil Dev. Can you say that nickname?

87) ‘Sunny Days’ is a well-known autobiography of a world-famous player. Name him:

88) Which Australian city has a cricket ground called the Oval?

89) Who was the only player to be dismissed at 99 in the Indo-New Zealand Test Series?

90) Who was India’s Captain when they first won over Australia?

91) The only instance in first class cricket when father and son umpired a match was:

92) This cricketer was declared out “handled the ball” in a Test against India. Name him:

93) Two school boys, now full-fledged cricketers, who created a world record by a total score of 664 runs in a school match in Bombay. Name them:

94) Which was the longest test ever played?

95) He is the first Indian to score a Test debut century in a match won by India. Name him:

97) Which English Captain was also a famous violinist?

98) Who was England’s fist Captain?

100) Name the two umpires in the first-ever One Day International:

ICC World Cup Base Question And the answer

Explanation:  There are 11 World Cup tournaments being held till date. Australia is the most successful country which has won 5 World Cup titles. India & West Indies are the only two countries which have won 2World Cup titles.

103. Which of the following country did not won the ICC Cricket World Cup (50 over format) title so far?

(d) All of the above

104. Which of the following Indian player have got first “Man of the Tournament” Award in the ICC Cricket World Cup?

Explanation:  The very first ICC cricket World Cup was played in England in 1975. West Indies won the both initial ICC World Cups held in 1975 and 1979. India has won this tournament by defeating West Indies in the final in 1983.

106. Which of the following statement is NOT correct about the ICC cricket World Cup?

(a) It is played after the gap of every 4 years.

(c) Pakistan and Sri Lanka are the other two countries that have won the World Cup in 1992 and 1996 respectively.

(d)  England is the only country which lost 2 ICC World Cup finals.

Explanation: Eighteen year old Mujeeb ur Rahman of Afghanistan is the youngest cricketer in the ICC World Cup 2019.

108. Which Indian cricketer had won the “Man of the Match” award in the final of the ICC World Cup 1983?

Explanation: Mohinder Amarnath was declared “Man of the Match” award in the final of the ICC World Cup 1983. He took 3 wickets after spending 12 runs and made 26 runs.

(d) None of these

Explanation: Kapil Dev was the captain of the Indian cricket team in the ICC World Cup 1983. In the final of ICC World Cup 1983; Kapil made 15 runs in 8 balls and took 1 wicket after spending 21 runs in the 11 over.

110. Which of the following country has hosted the ICC World Cup most times?

Explanation: England has hosted the ICC World Cup 5 times. India has hosted in 3 times in collaboration with other countries. But India will host this mega event alone in 2023.

You Must Like This Article also Read It Now: