We have given the List of Important Banking Terminologies. Candidates who are preparing for your Bank Examination & Interview can also read this. 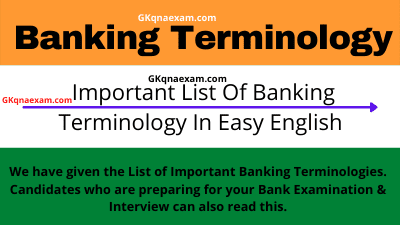 It is the rate of interest charged by a central bank to commercial banks on the advances and the loans it extends.

It is the rate of interest on which banks base their lending rates. Usually, loans are given at a rate higher than the base rates and the saving rate is below the base rate

It is written by an individual to transfer an amount between two accounts of the same bank or a different bank and the money is withdrawn from the account.

In this, all the branches of the bank are connected together and the customer can access his/her funds or transactions from any other branch.

the number of funds that a bank keeps with the RBI. If the percentage of CRR increases then the amount with the bank comes down.

It is an account that can be opened generally for business purposes with no restrictions on withdrawals and no interest paid.

It is a card issued by the bank so the customers can withdraw their money from their account electronically.

The way in which a bank keeps money in a deposit account is the same way the Depository Company converts share certificates into electronic form and keeps them in a Demat account.

It is a type of banking in which we can conduct financial transactions electronically. RTGS, Credit cards, Debit cards, etc come under this category.

In this, we use an Automatic teller machine, wire transfer, and computers to move funds between different accounts in the different or same bank.

It is the number of Funds borrowed by the government to meet the expenditures.

It is an increase in the quantity of money in circulation without any corresponding increase in goods thus leading to an abnormal rise in the price level .

It is the time when a company makes the first offering of the shares to the public.

They are machines that dispense cash, receive cash, accept cheques, and give balance details and mini statements to the customers through a Computer network

Bouncing of a cheque:

When an account has insufficient funds the cheque is not payable and is returned by the bank with the reason “Exceeds arrangement” or “funds insufficient”.

It is the ability to convert an investment quickly into cash with no loss in value.

It is a kind of security which one offers for taking an advance or loan from someone.

These are investment schemes. It pools money from various investors in order to purchase securities.

it refers to the Central Government policy with respect to the quantity of money in the economy, the rate of interest, and the exchange rate

An ATM or cash machine that does not prominently display a bank’s name or logo. A fee will be charged for cash withdrawals in these ATMs and they don’t accept deposits

Plastic money is a name given to Credit cards, Debit cards, ATM cards and International Cards issued by banks

Rate of interest at which a bank gives loan to its most reliable customer i.e., customer with ‘zero risk’

It is a book where all the bank transactions are recorded. They are mainly issued to Current or Savings Bank account holders.

Commercial banks borrow funds from the RBI if there is any shortage in the form of rupees. If this rate increases it becomes expensive to borrow money from RBI and vice versa.

It is the exact opposite of the repo rate. It is the rate at which RBI borrows money from banks when it feels there is too much money floating in the banking system

It is a reserve asset (Paper Gold) created within the framework of the International Monetary Fund in an attempt to increase international liquidity.

It is the amount that a commercial bank should have before giving credits to its customers which should be either in the form of gold, money, or bonds.

He/she is a staff member of the bank who cashes cheques, accepts deposits, and performs different banking services for the general mass.

When financial institutions and banks undertake activities related to banking like investment, issue of debit and credit card etc then it is known as universal banking.

Internet banking is sometimes known as virtual banking. It is called so because it has no bricks and boundaries. It is controlled by the World Wide Web.

needs of the institutional clients and the industry.

It is a bond that is sold at a good discount as it has no coupon.