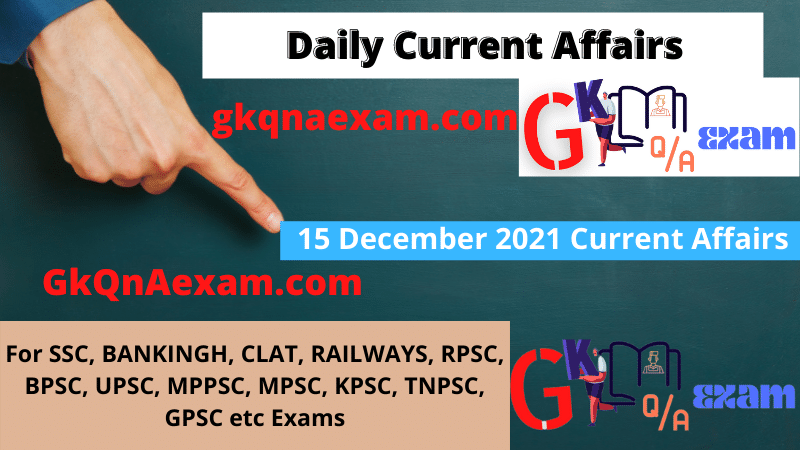 Question 2:- Which Indian mathematician has been awarded the DST-ICTP-IMU Ramanujan Prize in 2021?
Answer:- Neena Gupta.

Question 3:- Who was the most searched person in Google in 2021?
Answer :- Neeraj Chopra.

Question 4:- Which day is celebrated all over the world on 14th December?
Answer :- International Monkey Day.

Question 5: – In which state has Prime Minister Narendra Modi inaugurated the “Kashi Vishwanath Temple Corridor Project”?
Answer:- In Varanasi in the state of Uttar Pradesh.

Question 7:- When is International Neutrality Day celebrated?
Answer :- On 12 December 2021.

Question 8:- Which day is celebrated all over India on 14th December?
Answer:- National Water Conservation Day.

Question 10:- Which countries have announced to fund the construction of an Undersea Cable in the Pacific Ocean?
Answer: Australia, America and Japan.

Question 11:- Which ministry has started the “National Help Line Number 145466” against atrocities?
Answer:- Ministry of Social Justice and Empowerment.

Question 12:- Who has won the title of FIDE World Championship 2021?
Answer:- Magnus Carlsen.

Question 13:- “Manohar Parrikar Vigyan Mahotsav” has been organized in which state?
Answer:- In Goa.

Question 14:- Which bank has been honored with “two DigiDhan Awards” by the Union Ministry of Electronics and Information Technology?
Answer:- Karnataka Bank.

Question 15: – In which state the traditional buffalo race “Kambala Parv” is celebrated?
Answer:- In the state of Karnataka.