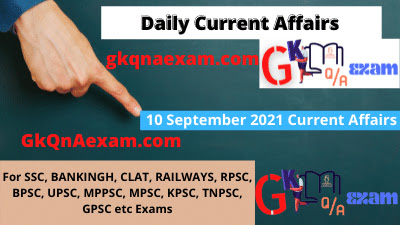 Question 2. Which day is celebrated all over the world on 9th September?

Question 3. Which ministry has constituted a task force to improve internet connectivity in the districts of Karnataka?

Question 4. In which country has the Taliban announced a caretaker government?

Question 5. Which space mission of ISRO has completed its 9,000 orbits around the Moon?

Question 6. Which state’s governor Baby Rani Maurya has resigned from her post?

Question 9. Name the Union Environment Minister who has launched a portal named “PRAN”?

Question 11. To whom has President Ram Nath Kovind presented the ‘Rashtrapati color Puraskar’?