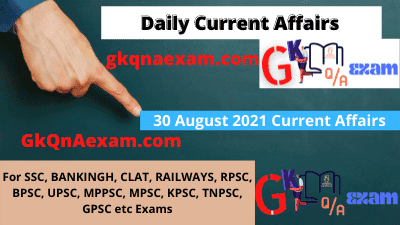 1. Which day is celebrated on 29th August in India?

2. For the first time in the history of the Maharashtra Congress, how many transgenders have also been given important responsibility?

3. Who
got the ‘Best Song’ award at the Sixteen International Film Festivals 16IFF 2021?

Ans. I bow to o mother

4. Which state government has adopted Indian wrestling till the 2032 Olympics?

5. Who created history by becoming the first Indian to secure a medal at the Tokyo Paralympics?

6. Which is the ‘Best Feature Fiction Film’ at the Sixteen International Film Festivals 16IFF2021?

Ans. the girl with the goat

7. Which country ended the evacuation operation in Afghanistan?

8. Which city has reached the first place in the world in installing the most number of CCTV cameras per square mile?

9. Who got the ‘Best Short Fiction Film’ award at the Sixteen International Film Festivals – 16IFF 2021?

10. Who got the National Award for Manufacturer of the Year Award?

11. Which cricketer, who played for India, has retired from all forms of cricket?

12. President Ram Nath Kovind has become the first President to visit Ram Lalla while in office, during which he has inaugurated the conclave?

13. UCO Bank has announced to extend the tenure of which posts for two years?

14. Which female bowler from the Netherlands has made a new world record by taking 7 wickets in T20 match?

15. Today (August 30) is celebrated every year as which day?

16. Which former President of the International Olympic Committee has passed away at the age of 79?

17. In view of the Corona epidemic, till how long has the ban on international passenger flights been extended?

18. How many new cases of corona have been reported in the country in the last 24 hours?

19. Which 19-year-old Indian shooter has won the gold medal in a 10m air rifle at Tokyo Paralympics?

20. Which app has been launched by Sports Minister Anurag Thakur on National Sports Day celebrated yesterday?

Small Industry Day is observed on 30 August per annum to support and promote small-scale industries. Do you know that tiny scale industries are privately owned small corporations or manufacturers with limited resources and manpower?