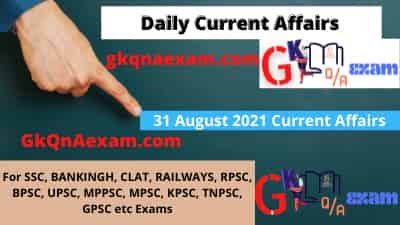 1. President Ram Nath Kovind will lay the foundation stone of which university in Gorakhpur today?

2. Which female tennis player has reached the finals of the singles at the Tokyo Paralympics?

3. Delhi Chief Minister has appointed actor Sonu Sood as the brand ambassador of which campaign?

Answer: Mentor of the country.

4. Which popular chef and filmmaker has passed away at the age of 55?

5. Tamil Nadu Governor Banwarilal Purohit has been given the additional charge of Governor of which state?

6. DGCA has lifted the ban on which aircraft after two years?

7. Which hockey player has been awarded the Biju Patnaik Sports Award by the Odisha government?

9. Which state government has decided to adopt whom by the year 2032?

10. 29th August is celebrated every year as which day?

12. According to the report of SIPRI, which country became one of the largest arms importers in Asia between 2016-20?

13. Nishad Kumar has created an Asia record by winning a silver medal in which event at the Tokyo Paralympics?

16. Which state assembly passed a resolution against the Centre’s agricultural laws?

18. Sania Mirza and Christina McHale were the runners-up in the title match of the Cleveland Open tennis tournament, which player did they face?

1️9. Aditi Ashok is related to which sport?

20. Which day was celebrated all over India on 30th August?