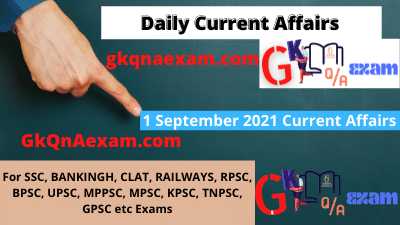 1. Rajiv Gandhi Kisan Nyay Yojana (RGKNY) is an initiative of which Indian state/UT?

Rajiv Gandhi Kisan Nyay Yojana (RGKNY) is a flagship scheme of Chhattisgarh state.
Under RGKNY, the state government provides input support to farmers for crop production.
If the crop sown in the Kharif season is destroyed due to a drought-like situation, financial assistance of Rs 9,000 per acre will be provided.
Those farmers who have sown paddy, bajra, and pulses in the current Kharif season and if their crop is destroyed due to lack of rain.
Under the Rajiv Gandhi Kisan Nyay Yojana (RGKNY), assistance will be given per acre on the basis of a survey for damage assessment.

2. Buddhadeb Guha, who passed away recently, was associated with which profession?

Renowned Bengali writer Buddhadeb Guha, who authored several popular books including ‘Madhukari’, passed away recently.
He died at the age of 85. He had won several awards including Anand Award and Sharat Award.
He has written notable books like ‘Koyal’, ‘Kojagar’, ‘Madhukari’, ‘Jungalmahal’, ‘Charibeti’ etc.
He is also the creator of two popular fictional characters in Bengali literature named ‘Rivu and Rijuda’.

3. When is the “National Small Industry Day” celebrated every year?

National Small Industries Day is an annual celebration to recognize the value of small industries in our society.
National Small Industries Day is celebrated every year on 30 August in the country.
A comprehensive policy package for the small scale sector in India was launched on 30 August 2000 to provide support to small firms in India.
The United Nations General Assembly has declared 27 June as MSME Day to raise public awareness about the contribution of MSMEs to the global economy.

4. Shanti Lal Jain has been appointed as MD and CEO of which public sector bank?

Shanti Lal Jain has been appointed as the Managing Director and Chief Executive Officer of Indian Bank.
He was earlier serving as the Executive Director of Bank of Baroda.
He will succeed Padmaja Chanduru, whose term ends on August 31, 2021.
His three-year term will start from September 1 and can be extended for two more years or till he attains the age of superannuation, whichever is earlier.

5. When is the ‘International Day of the Victims of Enforced Disappearances’ observed?