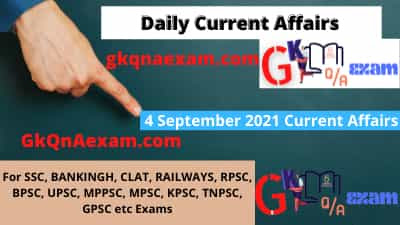 Q 1: The central government has announced how many new sports will be included in Group C jobs and will be given jobs under the sports quota.

Q 4: Name the Union Minister of AYUSH, who has recently launched the “Wi-Break” mobile application in Vigyan Bhawan?

Q 5: Which state government has announced to change the name of Rajiv Gandhi National Park to Aurang National Park?

Q 6: The world’s first “plant-based smart air purifier” has been developed by scientists from IIT Rooper and Kanpur and the Faculty of Management Studies of which university?

Q 7: According to NPCI, in which month of the year, transactions worth Rs 3.55 billion have been registered through UPI?

Q 8: According to which university report, air pollution can shorten the life of Indians by 9 years?

Q 9: At what age did the separatist leader of Jammu and Kashmir Syed Ali Shah Gilani die?

Q 10: Chandan Mitra, former Rajya Sabha Member of Parliament and related to what profession, died at the age of 65?