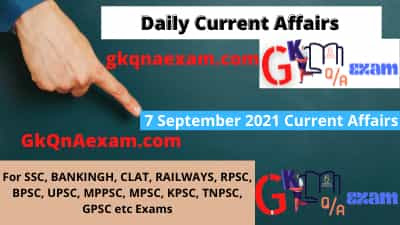 Question 1. What is the rank of India in the Para Olympics held in Tokyo?

Question 4. Which country has become the first Asian country to launch a plastic pact?

Question 5. Which company has been fined Rs 1971 crore by the Government of Ireland for not maintaining transparency in the privacy policy of users?

Question 6. In which city did Smt Nirmala Sitharaman lay the foundation stone of the Income Tax Department’s office building?

Question 7. Ladakh has declared two endangered species as snow leopard and which new state animal is the state bird?

Question 8. Which organization has released the Social Security Report 2020-22?

Q.9. Who has approved the indigenous corona vaccine CORBEVAX for clinical trials?

Q.10. Which e-commerce company has announced the launch of Kisan Store?