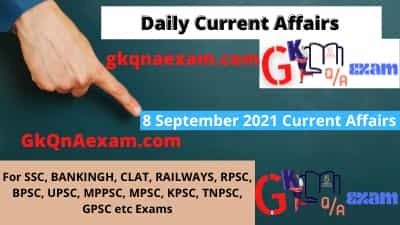 1) Defence Minister Rajnath Singh and Gujarat Chief Minister Vijay Rupani jointly reviewed the preparations for DefExpo-2022, to be held for the first time in Gujarat, at a meeting in Kevadia.

➙The 12th edition of DefExpo, which is India’s flagship event showcasing the land, naval, air as well as homeland security systems, will be held in Gandhinagar, Gujarat between March 10 and 13, 2022.

2) In a glittering ceremony that reflected the whole government approach of PM Modi and saw the participation of his six cabinet colleagues, Union Minister of Ayush Sarbanand Sonowal launched the ‘Y-Break’ mobile application at Vigyan Bhawan.

➨The five-minute Yoga protocol, especially designed for working professionals to de-stress, refresh and re-focus at their workplace to increase their productivity, consists of Asanas, Pranayam and Dhyana.

3) Separatist leader Syed Ali Shah Geelani passed away at his residence in Srinagar.

➨ Born on September 29, 1929 in Sopore, Geelani had served as chairman of Hurriyat for many years and was known as a hardline separatist leader who headed Hurriyat (G) group.

➨ He was an elected member of the J&K legislative assembly, representing the Sopore constituency in north Kashmir in 1972, 1977 and 1987.

5) A Bangladeshi vaccine scientist and a microfinance pioneer from Pakistan were among the five recipients of this year’s Ramon Magsaysay Award — regarded as the Asian version of the Nobel Prize.

➨ A technocrat by profession, Roy’s keen observation and detailed sketches of the human mind shine through his literature, proving him to be a literary scientist of sorts who follows no conventions when it comes to soulful writing.

7) Karnataka government will formulate a special programme to focus on the health and education of children and women in Raichur, Yadgir and Kalaburagi districts of the state.

➨ Ramacharyulu has been working as secretary in the Rajya Sabha Secretariat since 2018 and succeeds Desh Dipak Verma, who demitted office after serving for four years.

➨The NADS, developed by the Defence Research and Development Organisation (DRDO) and manufactured by BEL, is the first indigenously developed anti-drone system to be inducted into the Indian armed forces.

10) Bihar government has decided to introduce “catch-up” courses for flood-affected students in the state.

11) Life Insurance Corporation of India has inaugurated the ‘Ananda’ mobile app for the Digital paperless solution for new business processes.

12) Indore district administration claimed to have carried 100 per cent first dose inoculation of Covid-19 vaccine in eligible candidates, making Indore the first district in the country with over 10 lakh population to achieve the distinction.

13) In an effort to enhance electronic payment of taxes and dues easier, the Odisha government rolled out a revamped platform.

14) India and the US held a bilateral 2+2 Inter-sessional meeting in Washington DC and exchanged assessments on developments in South Asia, the Indo-Pacific region and the Western Indian Ocean.

➨ Both sides reviewed the progress made since the last 2+2 Ministerial Dialogue held in October 2020 and preparations for the forthcoming dialogue later this year.

15) In a significant decision, the Maharashtra government has decided to set up a world-class science city near Pune, under a Central scheme to inculcate the scientific spirit among students and prepare future scientists.

➨ The proposed complex will be named “Bharat Ratna Rajiv Gandhi Science Innovation City” and shall be developed on an 8-acre complex in the Pimpri-Chinchwad Municipal Corporation jurisdiction.

➨State-level and district-level committees have been constituted for selection of beneficiaries for the schemes.